Our greatest concerns are to meet the professional needs of our artists’, to effect the sales of their works, to represent them to public galleries, to assist with their publications, to act as a base for them and to help create international opportunities for them.

Represented artists exhibit regularly and take part in group shows. Artists also take the opportunity to make one-work shows for our window gallery – each window project eagerly anticipated by the public walking or driving past.

Bowen Galleries has developed strong trans-Tasman connections and enjoys relationships with colleagues and artists in Sydney and Melbourne in particular. For 40 years we have been assisting clients to put together collections of significant value, with works by New Zealand and Australian artists.

We have selected work by gallery artists in stock. We are very happy for you to pay things off. Penney and Jenny in front of Debra Bustin's Kotahitanga, 2021

The people who do the great stuff 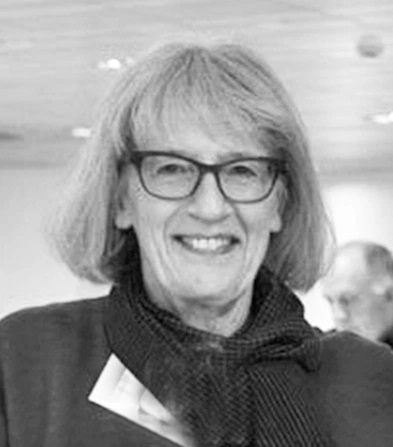 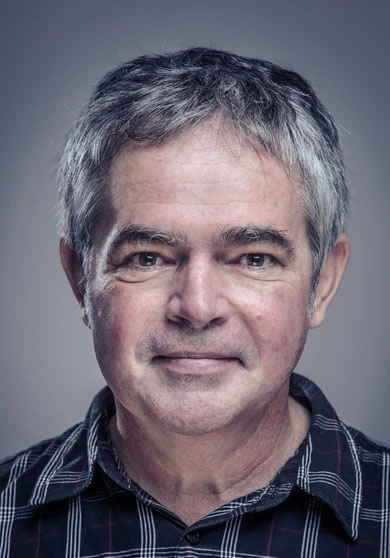 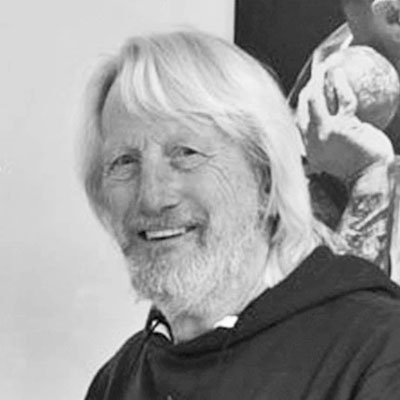 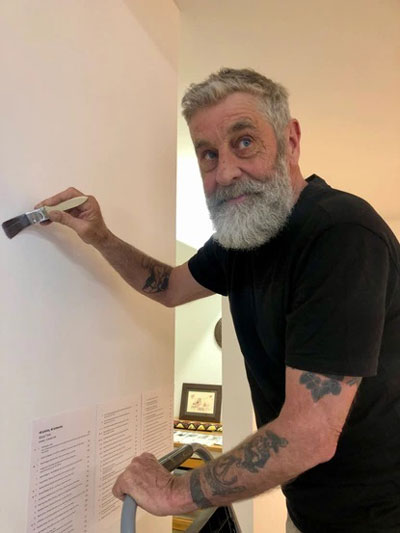 We may well live and die for RNZ, but we also enjoy Radioactive. Radioactive has an excellent programme of news, interviews and music that is insightful, uplifting and relevant to our day to day lives here in Te Whanganui-a-Tara. Bowen Galleries is proud sponsor of the Caffeine and Aspirin show on Saturday Mornings 10am – 1pm.

It has been our pleasure these past years to support and attend events with Verb festival. Verb has brought so much life, activity, adventure, connection and celebration to our city and we have been, and continue to be, proud hosts, sponsors and most of all, attendees.

Bowen Galleries opened in Bowen Street in Sept 1981, behind Lois Daish’s No 9 cafe.

We had lots of works-on-paper shows, especially young printmakers who had studied at Ilam School of Fine Arts, Canterbury University.

The police closed down a screening of Stuart Page’s images from the Springbok tour 1981 that we projected onto the walls of the Beehive in Bowen Street.

During this time works of represented artists were sold to public galleries regularly and the National Art Galleries acquisitions shows were exciting events.

In 1984 I curated New Women Artists (which toured nationally) with Dick Bett, Director of the Govett Brewster Art Gallery.

Bowen Galleries was forced out of the Bowen Street space in 1988 by the sale of the building to Government Property Services … but not before we won a case against the landlords for misrepresenting our lease to the purchasers.

Neil Rowe and I visited Shona Rapira Davies near Whangarei, taking smoked hapuka wings from Kaitaia. We walked with her to the no-longer-used cowshed where she was making the figures for Nga Moreheu. I will never forget walking around the corner and seeing those women for the first time.

We relocated to 136 The Terrace and opened there in 1989, sharing the premises with Christopher Moore Gallery.

Rents were still high and they were tough years financially. There were significant budget cuts for all the institutions, beneficiary cuts in 1991, and an awareness of poverty that made it difficult to be seen to support the arts.

In 1994 we took a stand at the Melbourne Art Fair (ACAF 4). Jonah Jones, the director, was filmed for SBS Television on our stand.

Jeff Thomson parked his corrugated-iron-clad Holden car outside the gallery. It was later purchased by Te Papa.

Both Bowen Galleries and Christopher Moore Gallery moved to 35 Ghuznee Street, opening there in December 2000.

In 2003 Neil Rowe died. Bowen Galleries owed its inception to Neil – my partner, writer, art critic, publisher, bookseller. Many of the ideas for shows, and contacts with artists who have become great friends, came through him.

We had a stand at the Melbourne Art Fair again in 2004, where we had a lot of attention and very good sales.

In 2005 Christopher Moore closed his gallery to work full time on art valuations.

Penney Moir then joined as a business partner and together we engaged the help of Sam Martin, architect, to reconfigure the gallery, taking us into a new phase.

We re-opened in November 2005 with I disappear by Gregor Kregar.

Milk Crate, our tenant set up and opened December 2005 serving the best coffee.

The Ghuznee Room operated from early 2006 until closing in Sept 2009 exhibiting artists on a proposal/fee basis with all sales going to the artist. Many artists benefited from successful shows.

We went to the second Auckland Art Fair in 2007 showing Euan Macleod and Warwick Freeman with Louise Purvis and Jeff Thomson in the Sculpture Court.

For the Melbourne Art Fair in 2008 we produced a collection of prints by artists with NZ/Aus connections called Crossing the Tasman.

Moving Sideways … on 10 Sept 2009 Bowen Galleries closed and moved next door to 39 Ghuznee St. We knew our lease was coming up for renewal and rent review; we also knew that the increase in rent would be unaffordable, regardless of the credit crisis. In early December 2008 Paul Hastings told us next door was for sale and he urged us to put in an offer; our offer was accepted.

Thanks to help from Workshop E and their recommended builder Shane Harper, Heritage Home Building, we were mostly ready to open on 22 September 2009.

With a fit out to pay for, a mortgage and two salaries Bowen Galleries faced a big challenge going forward. We met it head on, always mindful that our artists come first.

This decade and a bit has been packed full of wonderful exhibitions, successes for artists and many events  – too many too list but some of the highlights were:

2009 – Attended Chris O’Doherty’s book launch, The mind and times of Reg Mombassa at the National Art School (ex-prison building) in Darlinghurst, Sydney. We walked in and were immediately embraced by our Sydney artists all there to support Reg. It was a fun night, Dog Trumpet played.

Our trips to Sydney are memorable, for Euan Macleods survey exhibition, Surface Tension at SH Ervin gallery and the launch of the book Euan Macleod The Painter in the Painting written by Gregory O’Brien.

Alison Clouston’s exhibition, a collaboration with her mother Joan Clouston at Sydney Art School as part of a group show was very special.

It’s been our luck to visit Michael Kempson, Master Printer, Senior Lecturer and Director of Cicada Press, University of New South Wales, Art and Design to take in the complex process of etchings.

Auckland Art Fairs – in 2011 with Drawings. The brief to artists was Paul Klee’s quote: ‘A drawing is simply a line going for a walk.’

2012 – We exhibited Geoff Dixon’s  three paintings based on his visit to Tiritiri Matangi Island along with Euan Macleods portfolio of large etchings, Hearsay.

And the last in 2016, Joanna Braithwaite and friends.

2012 and 2014 we took part in an applied art fair Kete held in the Academy of Fine Arts building, Wellington. Sam Duckor Jones with his unforgettable lamps in 2012 and then Pauline Rhodes and Simon Ogden followed.

2013 – Louise Purvis won the McConnell Family Supreme Award for her sculpture Alterations, at the fourth biennial Sculpture in the Gardens, Auckland Botanic Gardens.

Gregory O’Brien curated Euan Macleod The Painter in the Painting for the Tauranga Art Gallery. Mark Roach from Exhibition Services picked up the show and toured it to regional galleries throughout New Zealand over several years. A huge success. We were very pleased to be at the first in Tauranga and the last venue Pah Homestead, Auckland where it looked superb.

Raewyn Atkinson won the premier prize in the Portage Ceramic Awards in 2016 for the second time (she won in 2004).

Ans Westra was 80 in April 2016. Suite Gallery hosted a very special dinner and evening for us all to celebrate with her.

2017 – In the spirit of where we began and with Tom Tuke’s help our exhibition Four Young Artists, 2 from Auckland, Nicholas Pound & Tom Tuke, 2 from Wellington, Yvette Velvin & Rachael Weeber helped keep us young.

2018 – A weekend in South Taranaki on marae, home to the iwi of Titokowaru.

We were very privileged to be part of Marian Maguire’s family and friends for the gifting  of Marian’s artwork, a painted fireplace, Te Koha to Ngaruahine – An experience the four who travelled up, Giovanni Tiso, Matthew Rowe, Penney and Jenny will never forget. Marian experienced help from many people in South Taranaki when undertaking her series Titokowaru’s Dilemma and this was her gift of thanks.

April 2018 – Four galleries collaborated (Anna Miles Gallery, Bowen Galleries, Masterworks and the National) in an exhibition, Shelf Life, arranged by Warwick Freeman on shelves of burnt, blackened pine to coincide with The Language of Things: Meaning and Value in Contemporary Jewellery, curated by Sian van Dyk at The Dowse.

2019 – Instead of participating in the AAF we exhibited Euan Macleods paintings in a show called Clouds and Caves in Terry Stringer and Tim McWhannells remarkable building, Eden Tce Auckland. Grant Allen, chef created a magical night, a sit down dinner for 20+ in Terry’s studio space to celebrate.

While back home in Wellington Tom Tuke curated a group exhibition of artists young and established, (thank you Noel McKenna for taking part) Anō Nei He Wai ~ Like Water.

It has been a pleasure working with Pip Oldham, oral historian. Pip recorded both Penney and Jenny remembering the years. The recordings have been placed in Alexander Turnbull Library.

March 2020 – Wellington dealer galleries collaborated in a project for the New Zealand Festival – Fired up, Festival of Ceramics. Each dealer gallery exhibited ceramics. Glenn Barkley, Sydney curated an International exhibition to complement and the programme of events included a sit down dinner on Ghuznee St and a one day symposium.

Then Covid-19 struck. The gallery closed as we went into lockdown.

We reopened on 18 May 2020 with There are no bees in my garden by Shona Rapira-Davies.

2021 Joanna Braithwaite delighted us with her exhibition for Face to Face, Portrait Festival, a collaborative series for exhibitions through Wellington dealer galleries to co-incide with the inaugural Kiingi Tu Heitia Portrait Award.

And Hariata Tangahoe inspired us with her exhibition Ira Wāhine.

September 2021 Bowen Galleries turned 40. Our heartfelt thanks to Debra Bustin for her first exhibition in Bowen St in September 1981 and it was a great pleasure to have her take part in the celebrations in 2021.

Gregory O’Brien curated ABOUT TIME, 40 artists celebrate 40 years. We are very grateful to Greg for this and for all he has brought to Bowen Galleries over the years.

A covid comment – the last few unprecedented years have seen us and our artists thrive on one hand and deal with never before anxiety on the other.

One of the truly stand out memories of this past twelve years has been the partnership between Penney and Jenny, the great privilege of working together for artists and the love and care Penney has brought to the business of art. And both are very pleased to have Maeve working along side us.